The History of Monemvasia

While uninhabited in antiquity, the rock may have been the site of a Minoan trading post. Pausanias, the renowned Greek traveler and geographer, referred to the site as “Akra Minoa”, which translates to “Minoan Promontory”.

The town and fortress were founded in 583 by inhabitants of the mainland seeking refuge from the Slavic and the Avaric invasion of Greece. A history of the invasion and occupation of the Peloponnese was recorded in the medieval Chronicle of Monemvasia.

From the 10th century AD, the town developed into an important trade and maritime centre. The fortress withstood the Arab and Norman invasions in 1147; farm fields that fed up to 30 men were tilled inside the fortress. William II of Villehardouin took it in 1248, on honourable terms, after three years of siege; in 1259 William was captured by the Greeks after the battle of Pelagonia and in 1262 it was retroceded to Michael VIII Palaiologos as part of William’s ransom. 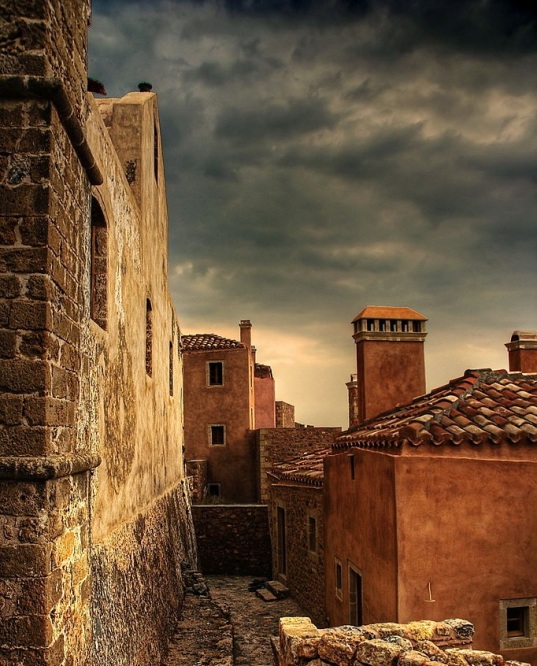 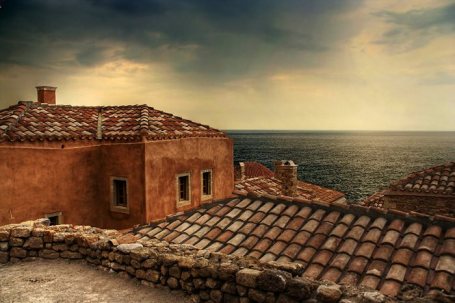 It remained part of the Byzantine Empire until 1460, becoming the seat of an imperial governor, a landing place for Byzantine operations against the Franks, the main port of shipment (if not always production) for Malmsey wine, and one of the most dangerous lairs of corsairs in the Levant. The Emperors gave it valuable privileges, attracting Roger de Lluria who sacked the lower town in 1292.

The town welcomed the Catalan Company on its way eastward in 1302. In 1397 the Despot of the Morea, Theodore I Palaiologos, deposed the local dynast of Monemvasia, who appealed to Sultan Bayezid I and was reinstated by Turkish troops. In 1419 the rock appears to have come into the possession of Venice, though it soon returned to the Despot. About 1401, the historian George Sphrantzes was born in the town.

After the fall of Constantinople in 1453 Monemvasia held out against the threats of Sultan Mehmed II in 1458 and 1460, when it became the only remaining domain of the Despot of the Morea, Thomas Palaiologos, claimant of the Imperial throne. He had no forces to defend it; he offered it to the Sultan, and finally sold it to the Pope.

By 1464 the inhabitants found the Pope’s representative feeble and the Pope unable to protect them; they admitted a Venetian garrison. The town was fairly prosperous under Venetian rule until the peace of 1502-3, in which it lost its farm lands, source of its food supply and of Malmsey wine. The food had to come by sea or from Turkish-held lands, and the cultivation of wine languished under Turkish rule.

The rock was governed by the Venetians until the treaty of 1540, which cost the Republic Nauplia and Monemvasia, her last two possessions on mainland Greece. Those inhabitants who did not wish to live under Turkish rule were given lands elsewhere. The Ottomans then ruled the town until the brief Venetian recovery in 1690, then again from 1715 to 1821. It was known as “Menekşe” (“Violet” in Turkish) during Ottoman rule and was a sanjak (province) centre in the Morea Eyalet.

The commercial importance of the town continued until the Orlov Revolt (1770) in the Russo-Turkish War, which saw its importance decline severely.

The town was liberated from Ottoman rule on July 23, 1821 by Tzannetakis Grigorakis who entered the town with his private army during the Greek War of Independence.

In 1971, Monemvasia became linked with the rest of the outside world through a bridge on the western side that connects to GR-86.

In more recent history, the town has seen a resurgence in importance with increasing numbers of tourists visiting the site and the region. The medieval buildings have been restored, and many of them converted to hotels.

For the past few years, on July 23, an independence day celebration has been held in the main port. Speeches are made and the story of Tzannetakis Grigorakis, and his men, is recounted in both Greek and English. Inhabitants and visitors can gather to watch as a ship, built every year, is filled with pyrotechnics and set on fire.

The 1987 horror movie The Wind was filmed here.